CLOSURE OF LOCAL ROADS TO MOTOR VEHICLES UPDATE
Last February I first communicated with you re the Councils proposal to close Eden Park Road to motor vehicles. In April, I informed you that the Drummartin Park Road may also be closed.
I now can confirm that both roads will be closed to motor vehicles, with works due to begin before the end of this year for completion by Summer 2022.I raised objections to DLR Council on the lack of public consultation on these proposals, the piecemeal approach to traffic calming in Kilmacud and highlighted the inevitable shift and increase in traffic volumes onto Sweetbriar, Slieve Rua, Rathmore, Hazel & Dale roads that will follow these road closures.
My proposal to DLR Council to adopt a whole area approach, to support the DLR Council objective to create safer communities for cycling and walking, was rejected in favour of this piecemeal approach.
Following my engagement with DLR, the Council has agreed to traffic monitoring in the area. Traffic surveys capture traffic volumes before and after the changes, and 2019 historical data pre-Covid can also be included for analysis.  This data will identify if the road closures have increased traffic volumes on our local roads, with DLR Council committed to reviewing the Eden Park junction, Drummartin Park and/or the implementation of further traffic amelioration measures in our local area. The first  traffic survey was undertaken in May 2021, with further surveys following completion of the works.
If you wish to contact me in relation to these, or any other local issues, my mobile is 086-851 6936 or e-mail moconnell@cllr.dlrcoco.ie.
NEWS UPDATE  - Thursday 21 October 2021

The changes to the Lower Kilmacud Road, Eden Park and Drummartin Park are implemented as part of the Dun Laoghaire Rathdown Active School Travel, Sea to Mountains Route. The objective is to provide enhanced cycle and pedestrian routes to encourage cycling and walking.
Works were suspended on the Lower Kilmacud Road last week, for a week, in advance of the Monday September 13th Council meeting regarding the Deansgrange Road proposed cycle way & one-way motor vehicle traffic reconfiguration, part of the Sea to Mountains Route.

At this meeting a decision was taken to further review options for the Deansgrange Road and engage with stakeholders over a 3-month period.  Deansgrange is part of the Sea to Mountains Route, which includes the works taking place on the Lower Kilmacud Road, Anville Woods, and the proposed closure to motor vehicles of Eden Park and Drummartin Park Roads.  Funding was provided by the NTA for delivery of the project in its entirety.

This delay also provides an opportunity for further monitoring of the impact of the existing works on the traffic movement in the area by residents and DLR engineers, especially as colleges reopen next week and workers begin to return to offices, inevitably increasing traffic volumes in our area.
Please get in touch with me regarding the effect these works are having on your area as I continue to monitor the impact on our community.
Wednesday 25th September 2021
Schooldays in Stillorgan
Kilmacud Stillorgan Local History Society is delighted to announce that Schooldays in Stillorgan – Scoil Lorcán Naofa by committee member Margaret Smith is now available for sale.
The book tells of the determination of local people to establish a national school in Stillorgan village in the 1830s.  The school was located on what is now the Old Dublin Road and later moved to its present location in 1931.  Since then it has grown to meet the needs of the expanding suburb.
It contains interviews with past pupils, teachers and others associated with the school. It also casts an eye on the changes that have taken place in Stillorgan. You might be surprised to find yourself in one of its large collection of photographs.
Are you a past pupil of St Laurence’s Boys National School?  Perhaps you were a teacher, a member of the Board of Management or the Parents’ Association.  Have you an interest in primary education or in your local history?  If so, this book is for you.
The book is available from Kilmacud Stillorgan Local History Society's On-Line Shop and costs €15 plus postage and packing. The book is also now available from TODAY'S Lakeland Store, Lakelands Road. Purchases for local addresses in Kilmacud, Stillorgan and surrounding areas that can be hand delivered will have any postage paid refunded.
It is also available at South Dublin Credit Union, Lower Kilmacud Road.  It will be available at further outlets, including St Laurence’s BNS – check our website for updates.
All profits will be donated to the school 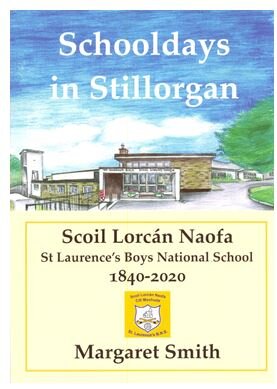 The committee became aware of an issue where Panda Waste bin collection vehicle crews were unable to fully access Anville Drive because of parked cars, resulting in the non-collection of some green bins.
We got in touch with Panda's Customer Care - Domestic Dept to establish what their policy was if bins could not be collected because of obstructions. They informed us that their crews often report cars parked in a way that causes an obstruction in this area. They said if access is blocked, the crews have no choice but to abandon collections in that area. Where possible they will try at a later stage in the day, however this is not always feasible.
In similar circumstances and of greater concern to all our residents is accesibility for emergency vehicles such as fire tenders or ambulances.
The committee would therefore ask all residents to be mindful of where they park to ensure ease of access for emergency and service vehicles.
News Update - July 2021
Retired
After  24 years service under various owners, Mary Casey, St. Kevins Park calls time on work as she reached  pensionable age, or 'bus-pass age'. The store on Lakelands saw many changes during her time, she started when the store was a Londis franchise, then Clark's and finally Today's franchise. A popular person with the customers always had time for a chat and a laugh. Great banter also with suppliers especially the delivery staff. She retired Friday 2nd July and celebrated her 66th birthday on Saturday 3rd. Congratulation on extending your weekends by 5 more days.   Pictured with Mary is work colleague Rhianna, and well wisher cousin Martha and  husband Paul.
Amateur Photography Competition - Winners
Entries for our amateur photographers have been judged by Redesdale Residents Association Committe.
The winning entry in the under 12 category 'Pigeon in Nest' was won by Jamie Rapple,  The over 18 / adult category 'The Dark Side of the Sun' was won by Emily Loughran.
Thank you all for paticipating, congratulations to the winners. [ view winning entries ]
Clean-up weekend a great success 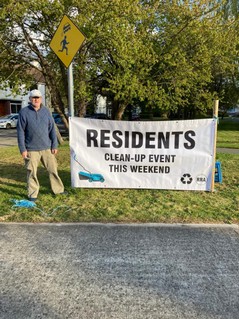 From Highridge Green to Rathmore Avenue and all roads in between our clean-up weekend was a great success with residents answering the call in great numbers. Redesdale Residents Association chairman commented 'what a weekend, a great turnout for the clean-up, so heartening. The banners were super effective and the skips added great value. The estate looks  wonderfully tidy".
'Just nodding off over a glass or two of Punta Aquila with a warm tiredness of a very memorable productive and enjoyable day in great company. A day that started in a monsoon and ended in warm sunshine brilliant community effort by everyone', commented Paddy Loscher.
Karen Devine added, 'it was a super community turnout this weekend'.
With the phased lifting of the Covid Level 5 restrictions from the 10th May, and with optimistic expectations for the summer, the RRA will be monitoring the situation closely with a view to organising some form of community events in the summer months.
In the meantime it is important we keep following government and HSE protocols and remain safe. [ click to view clean-up photos ]
News Update - April 2021 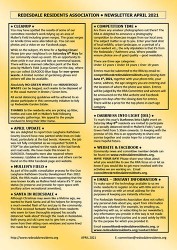 View our April Newsletter
[ click here ]
On the edge 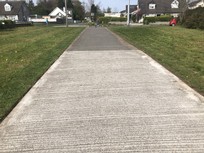 On the edge, more environmental tidying. Committee members Tom, Dinny and Paddy edging the grass margins on Anville Drive and at the Dale Road entrace to Mullen's field.
We have pencilled in May 8th for the next community cleanup. Full details will be in our next newsletter. [ more ]
Hard work in Mullen's Field

Tom Daly, RRA chairman and Paddy Loscher RRA environmentalist hard at work clearing the overgrowth at the rocks in Mullen's Field.
Redesdale Residents Association  activities have been heavily curtailed due to the pandemic. At a virtual meeting on Thursday 8th April organising future activites was discussed by the committee.
We will wait and see what measures the government will be taking with the announcement on the 12th April. [ more ]
Keyless car theft in the area 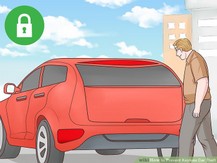 Over the last week there have been several incidents of keyless or relay car theft in the Redesdale area and one incident of the theft of a catalytic converter. Thieves use electronic devices to amplify your key's signal and open the locks on your car.  Please be vigilant and do not leave car keys in your hallway.
Visit this site for great prevention tips: https://www.wikihow.com/Prevent-Keyless-Car-Theft
Lanpard 2 Pack Small Faraday Pouch with Hook Securing Keyring, RFID Signal Blocking Faraday bag for Car keys available on Amazon - [ link ]
Back to content